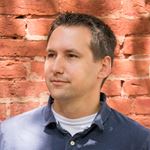 Creating an emulator is a very powerful experience. Not only do you become intimately familiar with the target hardware, but you virtually recreate it with simple keystrokes. Emulators aim to recreate every single component of a piece of hardware down to the electrical timing of a single CPU cycle, not to be confused with simulators, which simply mimic a platform. It’s not always a simple task, but it’s very rewarding when you power it up and are presented with a piece of childhood memory. Sure, there are plenty of emulators out there, but creating your own makes using it and tweaking it so much more fun.

I wanted to emulate a Commodore 64... Why? The Commodore 64 was a staple of my childhood. Before graphical OS’es and the internet, there was just imagination and a command prompt. Pair that with some BASIC programming books that my dad left lying around and I felt like I had the world at my fingertips. I wanted to become more familiar with the first computer I ever used. The C64 is simple and complex at the same time, and its internal workings intrigued me.

The MOS 6510 was the CPU that the C64 used. To emulate a full C64 machine, you would also need to emulate the MOS 6581 SID (sound), MOS VIC-II (display), MOS 6526 CIA (interface adapters), I/O and more, but this article focuses on the heart of it all – the CPU. The memory in a C64 is also outlined, because without memory, the CPU can’t do very much.

First off, this article is, as mentioned in the title, a crash course. So, I won’t be going into a lot of detail. It’s more of a primer for those of you who are interested in MOS 6510 emulation, and something to send you off in the right direction.

The basic cycle your emulator will perform will be the following:

The CPU is responsible for processing instructions from memory. It’s an 8-bit processor, which means the registers will store 8 bits each, other than the PC (program counter), which is 16 bits (high and low bytes) so that it can store a memory location.

To emulate the processor, you will need to implement the following components...

Registers are small areas of memory located directly in the processor that have extremely fast access. Each register has a purpose and can be used in various ways depending on the context of an instruction.

The status flags are used in the byte that makes up the P register. They can alter the way certain things behave when set or unset and provide status outcomes for operations.

There are too many instructions to list in this crash course, but here is a link to an opcode matrix. It shows the value of each opcode, the associated instruction and addressing mode, as well as the logical function of each.

One of the most important aspects of emulating the CPU is the timing. For my C64 emulator, I used the PAL specification of 0.985 MHz, or 985,000 cycles/second. If you are implementing the NTSC specification, then you would use 1.023 MHz. As I said before, if not implementing cycle-exact emulation, you need to determine how many cycles each instruction takes and increment the cycles that have passed. This is important for determining when certain IRQ’s should be fired as well as the progress of the raster line when implementing the VIC-II. The raster line position will have to match the CPU cycles (screen refresh is 50 Hz on PAL, 60 Hz on NTSC) so that programs which rely on raster line position to create certain graphical effects will work.

Also, keep in mind that certain things take extra cycles. For instance, if an instruction uses Absolute Y addressing and crosses the page boundary in memory, that takes an extra CPU cycle.

The MOS 6510 is a little endian chip. This means that when you are reading a word from memory (16 bits on the MOS 6510), you will need to read in the second address position first, followed by the first address position. You can then use the result to create a 16 bit variable in your programming language of choice. A simple example of this is as follows:

The C64 has 65,535 bytes of memory, or 64 KB. Bank switching is used to switch the ROM and I/O in and out by changing the latch bits in the first two bytes of memory. A page of memory on the C64 is 256 bytes. The first page is called the Zeropage and is easily addressable with zeropage addressing, which is fast because the C64 is an 8-bit machine. 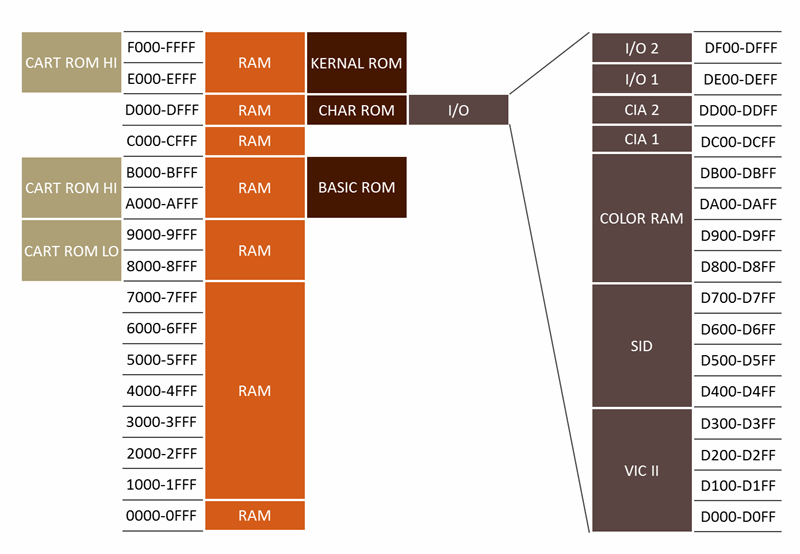 Here is a basic mapping of the C64’s memory:

When I/O is switched on, the region 0xD000-0xDFFF maps to the following:

There are two important factors when initializing your emulator – the PC and directional/latch bits in the first two bytes of memory.

The PC should be initialized to the word read from memory location 0xFFFC. This will read from the KERNAL ROM due to the latch bits initialization.

That concludes the crash course. Hopefully you’re at least a little more informed about the MOS 6510 than before. The only external pieces you will need to obtain in order to create your emulator are the three ROM’s as mentioned above – BASIC, CHAR and KERNAL. These can usually be obtained somewhere online or from another emulator. It’s a lot of work to emulate anything, but it’s a fun project and worth it in the end.